From deadline dilemma to World Series champs? Here’s who could be this trade season’s Atlanta Braves 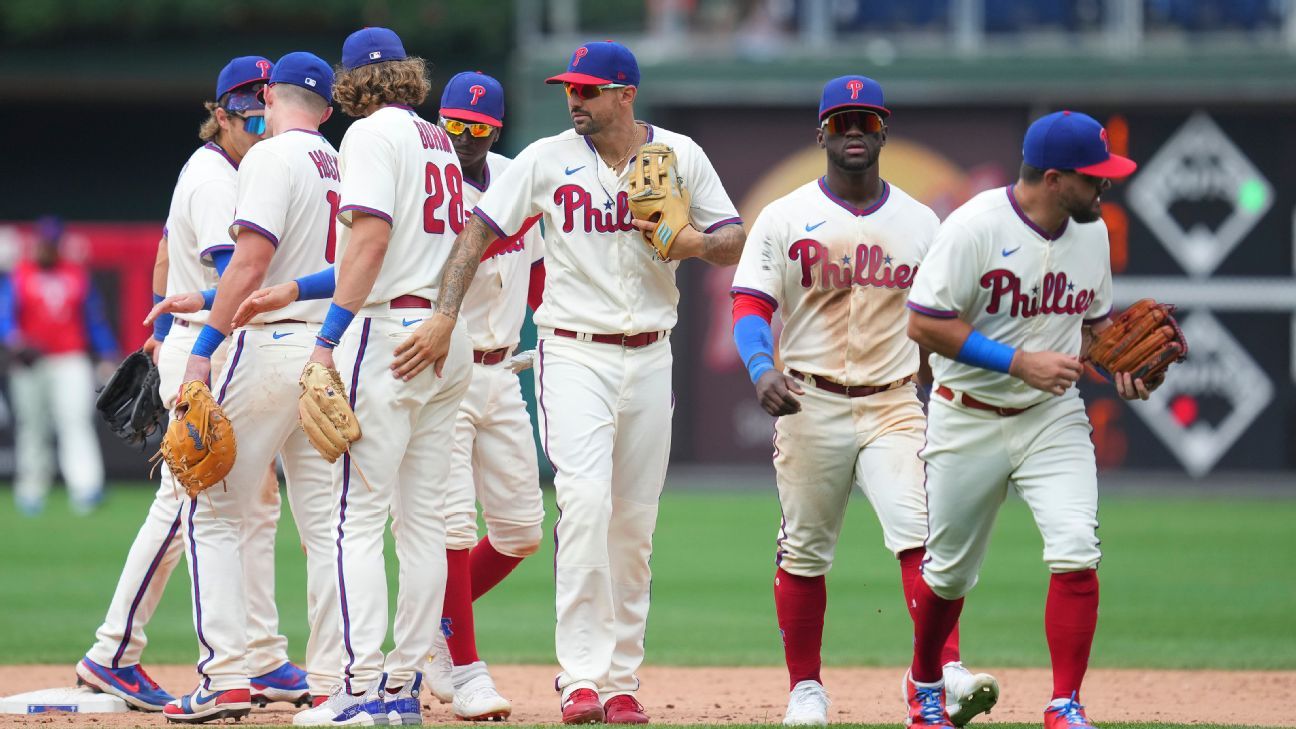 What is surprising is what happened given where the Braves stood on July 30. After losing to the Brewers that night they were 51-54 and hadn’t spent a single day over .500. They were, however, only five games behind the Mets in the National League East, so Alex Anthopoulos decided to act. After trading for Joc Pederson a couple weeks earlier to replace the injured Ronald Acuna Jr., Anthopoulos added three more outfielders on July 30, acquiring Jorge Soler, Adam Duvall and Eddie Rosario.

All four contributed down the stretch, a struggling bullpen suddenly got hot, the Mets collapsed, Rosario won NLCS MVP honors and Soler captured the World Series MVP trophy — and the Braves were champs for the first time since 1995.

So the question for 2022: Who can be this year’s Braves? Which team can swing big like Anthopoulos did last year and make a World Series run?

There are a few candidates that we’ll get to, but the clear favorite to pull it off is another NL East club, the Philadelphia Phillies. The Phillies are a team that hasn’t made the postseason since 2011 (believe it or not, the second-longest playoff drought behind the Mariners), a third-place team currently looking up at the Mets and Braves — but a team with clear strengths and obvious problem places to upgrade. Dave Dombrowski has been an aggressive general manager throughout his career and this is a team in absolute win-now mode. No, they probably won’t get hot enough to catch the Mets and win the division, but they can win a wild card and get hot in October.

1. Following the blueprint of the Braves, the Phillies don’t have to swing for the fences. The Braves didn’t trade for any of the biggest names on last year’s trade market, but improved around the edges. That’s what the Phillies need to do — and, really, that’s their only realistic option unless they’re willing to trade their top two prospects, pitchers Andrew Painter and Mick Abel. They’re not going to be in on Juan Soto.

2. They already have Zack Wheeler and Aaron Nola, a pair certainly capable of emulating the run Stephen Strasburg and Max Scherzer went on in carrying the Nationals to the 2019 title after the Nats squeezed into the postseason as a wild card. The difference: That Nationals team had a strong No. 3 starter in Patrick Corbin, whereas Kyle Gibson is more like Anibal Sanchez, Washington’s No. 4 starter that year. So the Phillies need another starting pitcher. If they want to think big, how about Detroit’s Tarik Skubal? Given his years of team control (through 2026), you’re probably looking at coughing up Painter or Abel, or at least catcher Logan O’Hoppe, but the Phillies would get the No. 3 starter who has even more upside in the future. Rentals might include Martin Perez (although the Rangers seem reluctant to deal him), Boston’s Nathan Eovaldi, Pittsburgh’s Jose Quintana or maybe even San Francisco’s Carlos Rodon, who has an opt-out clause and may be available given the Giants’ recent slump.

3. Improve the defense with Kansas City’s Michael Taylor to play center field. Taylor (+8 defensive runs saved) is an upgrade on Odubel Herrera (minus-2 DRS) in the field and at the plate. He’s signed through 2023, so the Royals won’t give him away, but he won’t cost a premium prospect. Until Bryce Harper returns, Herrera could slide to a corner spot to allow Kyle Schwarber or Nick Castellanos to DH — so you’re really upgrading on defense at two spots.

4. Add some relievers. David Robertson is the obvious candidate, a veteran who can fill the eighth- or ninth-inning role. Like the Braves last year, however, they’ll need some of the guys already here to step up. It’s possible; A.J. Minter was actually in Triple-A on July 30 last season, but came back, found the strike zone and was a key reliever for the Braves in the playoffs.

5. And perhaps most importantly … get Harper healthy. Even better, hope Castellanos finds his 2021 stroke.

Like the Braves, the Phillies have a championship-caliber core, at least if Harper and Castellanos are in the lineup and hitting. Add a few upgrades and anything can happen in October.

The Phillies’ playoff odds heading into Friday’s games, according to FanGraphs, were 51.0%, with a 1.9% chance to win the World Series. So 50-50 to at least make it and — given the gauntlet of running through the division winners in the next two rounds and then a tough AL opponent in the World Series — slim to none to win it all. But look where the Braves were a year ago: Just 11.9% to even make the playoffs and 0.8% to win the World Series.

And here are a few more teams who could also surprise with some trade deadline moves:

Playoff odds: 54.7% (FanGraphs still considers them the favorites to win the division)

The White Sox aren’t going to trade Lucas Giolito or Lance Lynn, so that’s a sign that the people who make these decisions still believe in this club — and they should. The White Sox are right there in the AL Central race despite their disappointing record, with nine games left against the Twins and six Guardians to make up ground. Their next 16 games are against the A’s, Royals, Rangers, Royals again, and Tigers, so now is the time to go on a 13-3 run and turn their season around.

What do they need? A power bat, as Luis Robert leads the team with just 12 home runs. They don’t have the prospects to acquire Juan Soto, so the next-best hitters available are Josh Bell and Willson Contreras, although in either case that would mean more Andrew Vaughn in the outfield. Mostly, however, the White Sox just need Giolito, Lynn and Yoan Moncada to find their 2021 form and Eloy Jimenez to start doing something.

The Red Sox have been so bad in July it’s difficult to envision a sudden turnaround, no matter the moves they might make. But they did inform Xander Bogaerts, who has an opt-out clause after the season, that they will not be trading him, so that’s perhaps a sign that they’re not willing to punt the season — simply an indication that they want to re-sign Bogaerts, but could still end up trading Nathan Eovaldi, J.D. Martinez, Christian Vazquez, Enrique Hernandez, Rich Hill or Michael Wacha, all of whom are heading into free agency. Their obvious problem: 35 of their remaining 61 games are against AL East opponents, and they’re 12-29 within the division.

So how do you get the Red Sox into October, let alone winning it all? Well, if they don’t get healthy, it won’t matter. Rafael Devers, Trevor Story, Hernandez, Hill, Wacha and Chris Sale are all on the IL, but Devers, Story, Hill and Wacha are close to returning. Garrett Whitlock has returned to the bullpen to help what has been a shaky group. They obviously need more offense from Alex Verdugo (possible) and Bobby Dalbec (don’t bet on it). The Red Sox are unlikely to make any significant outside acquisitions, and Sale’s return from a fractured finger remains in “we hope he’s back before the season ends” mode. In other words: It’s not looking good here.

The Mariners have played themselves into a great chance to end their world-famous playoff drought, which goes all the way back to 2001, and they decided to go by big by trading for Luis Castillo in the largest deal of this deadline so far. If they get through their next 12 games — their final two of the season against the Astros, six against the Yankees and four against the Angels — without too much damage, then the schedule turns into the softest in the majors after that.

The deadline is less than a week away. Which players could finish the season on a different team?

But it’s also clear they don’t have the horses to compete against the Astros and Yankees in playoff baseball — Houston’s pitching staff has throttled the mediocre Seattle offense in head-to-head play since the All-Star break. Rookie George Kirby is at 96 innings and may be nearing his innings limit as well after pitching just 67 innings in the minors last season. So to make any playoff run, they need to go upgrade their roster.

On offense, they may simply hope that Mitch Haniger, out since April and finally rehabbing in the minors, will provide enough of a lift, but they could really use another bat besides him. Maybe someone like Ian Happ of the Cubs (who has another year of control), Brandon Drury of the Reds (if they think he can play second base), Bell or Trey Mancini to DH (if they’re willing to move Carlos Santana to the bench).

Seattle’s secret ingredient to a potential playoff run though: A deep bullpen. They’re seventh in the majors in bullpen ERA, but after scuffling in April and dumping some guys, they’ve been in high gear since May 25, with a 2.59 ERA, best in the majors in that span (heading into Friday). Scott Servais used either Paul Sewald or Diego Castillo as the closer, Erik Swanson has emerged as a key setup guy, and rookies Andres Munoz and Penn Murfee have combined for 102 strikeouts and 17 walks in 82.2 innings. As the Braves showed last year, you can basically go five-and-dive with your starters in the postseason if you have a deep bullpen to carry a heavy workload. 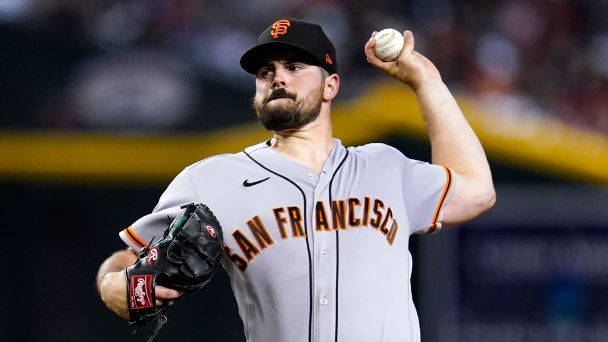 That seven-game losing streak coming out of the All-Star break — four in L.A. and three in Arizona — was a killer, as the Giants saw their playoff odds drop from 52% to less than half that. The front office is in a tough position: It remains an old, veteran roster, but they’ve also built the best farm system they’ve had in year, headlined by shortstop Marco Luciano and pitcher Kyle Harrison. Indeed, that could part the Giants in the running for Soto — they certainly need a lineup anchor who isn’t 30-something years old.

So that’s the big play: Trade for Soto, and while you’re doing that, go after Frankie Montas. Would you want to face the Giants in a short series and have to beat Logan Webb, Rodon and Montas? On the other hand, the Giants could say, “Hey, we’re not even in a playoff position right now, we’re the oldest team in the league, we just don’t have the magic of 2021, there’s no way we’re beating the Brewers and Dodgers and the Mets in the playoffs, so let’s see what we can get for some of these guys.” The only hitch there is Rodon is the only guy who has much trade value — Joc Pederson is a free agent, but he’s not going to bring much in return. Frankly, coming off last year’s 107-win season, they may as well roll the dice and try to win.

After all, isn’t that the objective? 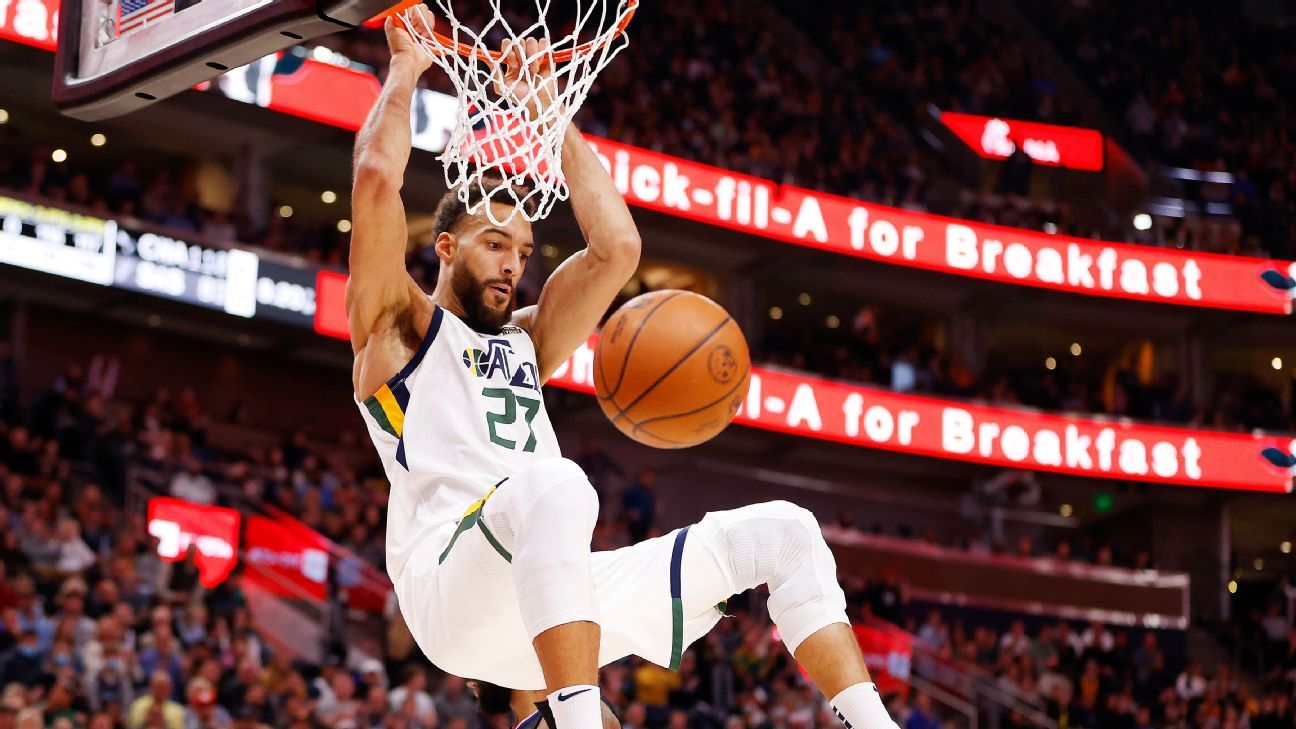 The Utah Jazz agreed to trade center Rudy Gobert to the Minnesota Timberwolves in a blockbuster deal that will pair him with fellow All-Star big man Karl-Anthony Towns, sources told 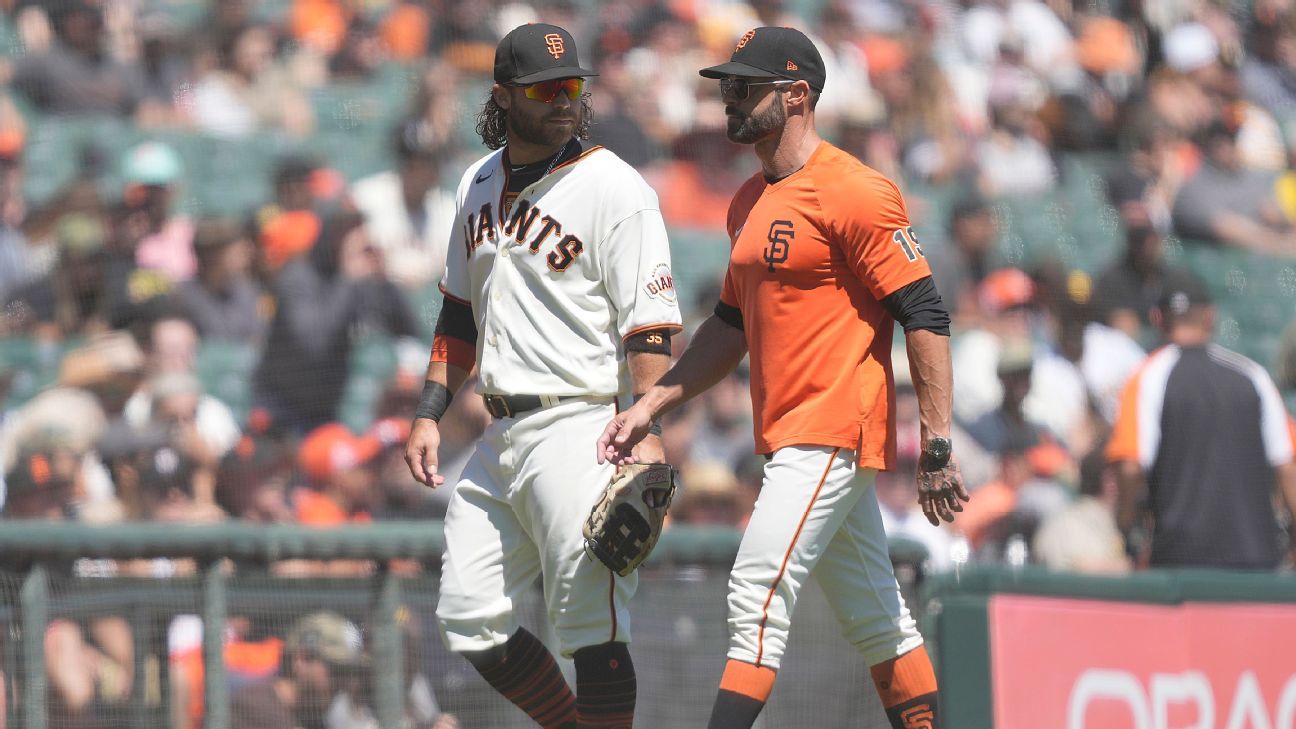 A year ago at this time, the San Francisco Giants were the biggest surprise in baseball as they rolled through the 2021 regular season with an MLB-best 107 wins. This 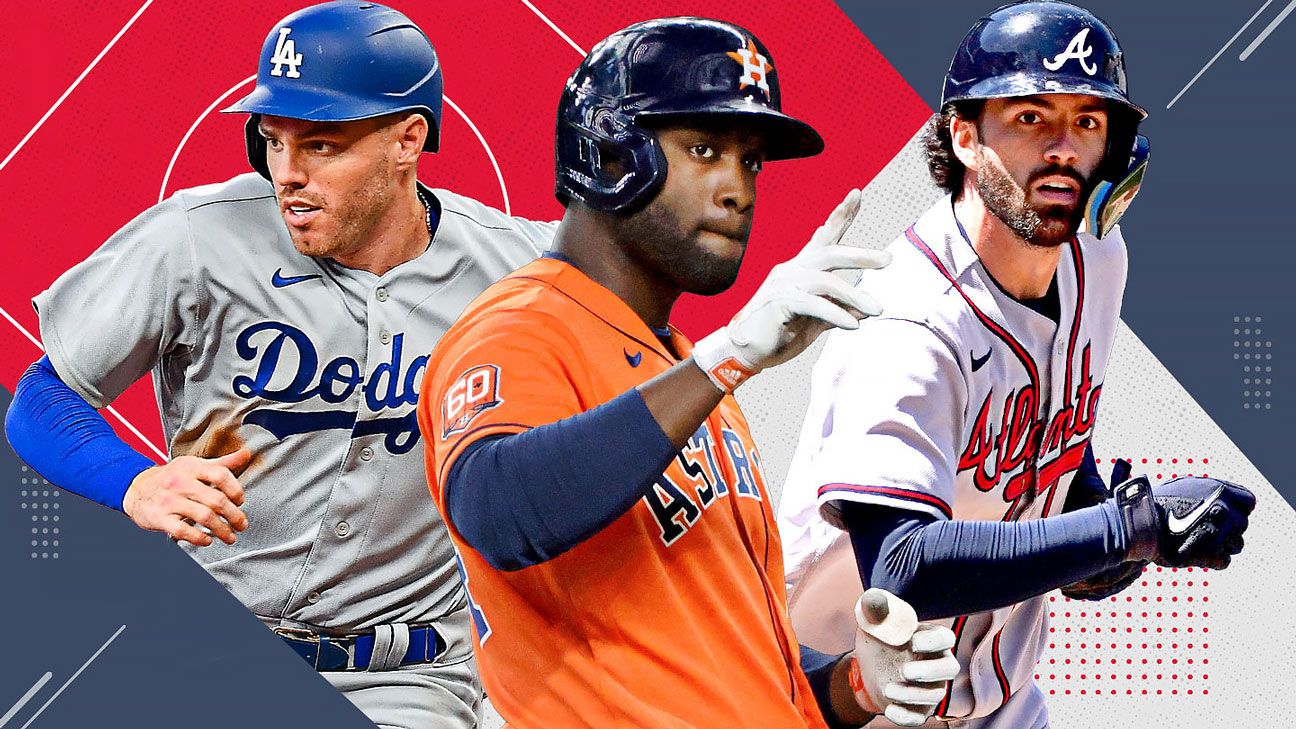