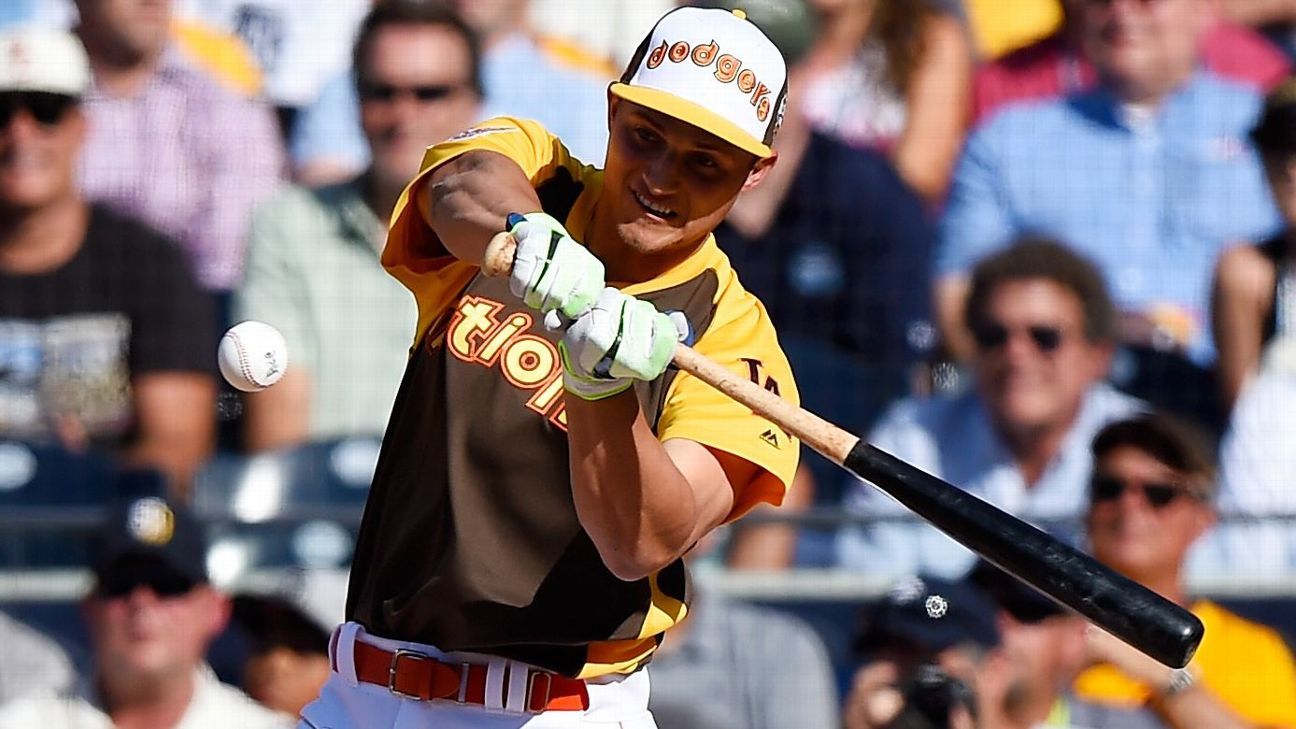 Corey Seager called his father Thursday to ask Jeff Seager how long it has been since he’s thrown batting practice. It might have seemed an odd question, but there was a very special reason behind it: Corey wanted his dad to pitch to him in the Home Run Derby.

Jeff Seager did not immediately say yes. Rather, he drove the 2 miles to Northwest Cabarrus High School, where he had thrown a zillion hours of batting practice to his sons within cages for which the Seagers possessed a key. Jeff Seager loosened up his arm — and apparently felt OK, because he quickly phoned Corey back to give him the OK.

Seager will likely be a favorite of the Dodger Stadium crowd in the Derby, as he returns to L.A. for the first time since he signed with the Texas Rangers as a free agent in the offseason. He’ll have an ingrained understanding of how the ball will travel in the late afternoon on a hot California day. He’ll be surrounded by familiar faces, from security to the clubhouse attendants. But the most rewarding part of the event for Seager will be sharing the moment with his father. “He has probably thrown the most to me in my life,” Corey said in a phone conversation this week. “You’re doing what makes you the most comfortable.”

“It’ll be a really exciting moment, in multiple ways.”

When Corey did the Derby back in 2016 in San Diego, Jeff Seager threw to him then, too. Corey remembers his dad being pretty nervous at first, “but then he kind of locked in.”

As the last confirmed contestant, just 72 hours before the Derby, Seager made no plans to practice, to reacquaint himself with the pace of the event, the exhaustion that overtakes a lot of the competitors. “Nah, I’m just going to wing it,” he said, though he added: “I definitely will try to pull the ball.”

A rundown of some of the plans and pitchers for the other Home Run Derby sluggers:

For the slugger who has seemingly mastered the art of the Home Run Derby like no other player, there was no doubt about whom he would pick to throw to him — the man who could be regarded as the industry standard for batting practice pitching, 65-year-old Dave Jauss.

In 2021, Jauss was a coach with the Mets and helped Alonso dominate the Derby in Colorado. After the Mets changed managers and most of their coaching staff, Jauss took a job with the Washington Nationals. But Alonso approached him during spring training to confirm that if Alonso was back in the Derby, Jauss would again throw to him.

Actually, it was Alonso’s teammate, Jeff McNeil, who first leaked the news to Jauss. “So you know, Pete’s going to ask you again,” McNeil said.

Jauss has a long history in the Derby. He and Clint Hurdle threw to all the competitors in 1999, when the event was in Fenway Park, and after his showing with Alonso last summer, Jauss was asked to throw to hitters in Major League Baseball’s Home Run Derby X. Scheduling around his work with the Nationals, Jauss was in London earlier this year and has trips scheduled to South Korea and Mexico in the months ahead.

His ability to throw consistently in batting practice, Jauss said, laughing, is what “has kept me in the game. I’m not wearing the Wally The Green Monster costume, and I don’t have to be Abraham Lincoln in the presidents’ race.”

The experience of throwing in the Derby has been enriched by sharing the experience with Alonso, whose family has embraced Jauss and his family. “He’s such a quality guy, and good for the industry,” Jauss said.

Like Alonso, Soto makes it clear his goal is to win. Last year, Soto took out Shohei Ohtani in a wild first-round matchup, and what he learned from that night will inform his approach in this year’s Derby. “I’m going to do the same thing I did last year — I’m not going to try to hit moon shots,” he said. “I’m going to just be consistent [with my swing].”

The urban legend surrounding the Derby is that hitters will sometimes mess up their swings going through the event, which requires the participants to take the sort of rushed hacks they never would in their day-to-day preparation. But Soto mentioned last year that he felt that the Derby helped him, getting his aggressiveness and swing on track for a second half in which Soto generated a slash line of .333/.485/.601. That experience has Soto all-in on this year’s event, and he has asked Jorge Mejia to pitch to him. He has worked with Soto extensively; the two met when Soto was 17 years old. “He’s been my hitting coach in the offseasons,” Soto said.

Mejia’s delivery, Soto said, allows him to see the ball well — a three-quarters motion, not too high and not too low. “He’s pretty accurate,” Soto said.

Rodriguez is 21 years old and ranks among the youngest competitors in Home Run Derby history, but he’s asked around enough to know this: He’s not going to worry about distance, just clearing the fence. “I’m not going to be trying to hit the ball the furthest,” he said over the phone. Rather, his hope is that he gets a lot of pitches up in the zone so he can consistently get the ball in the air and over the fence, while conserving some of his energy for the swings to follow. 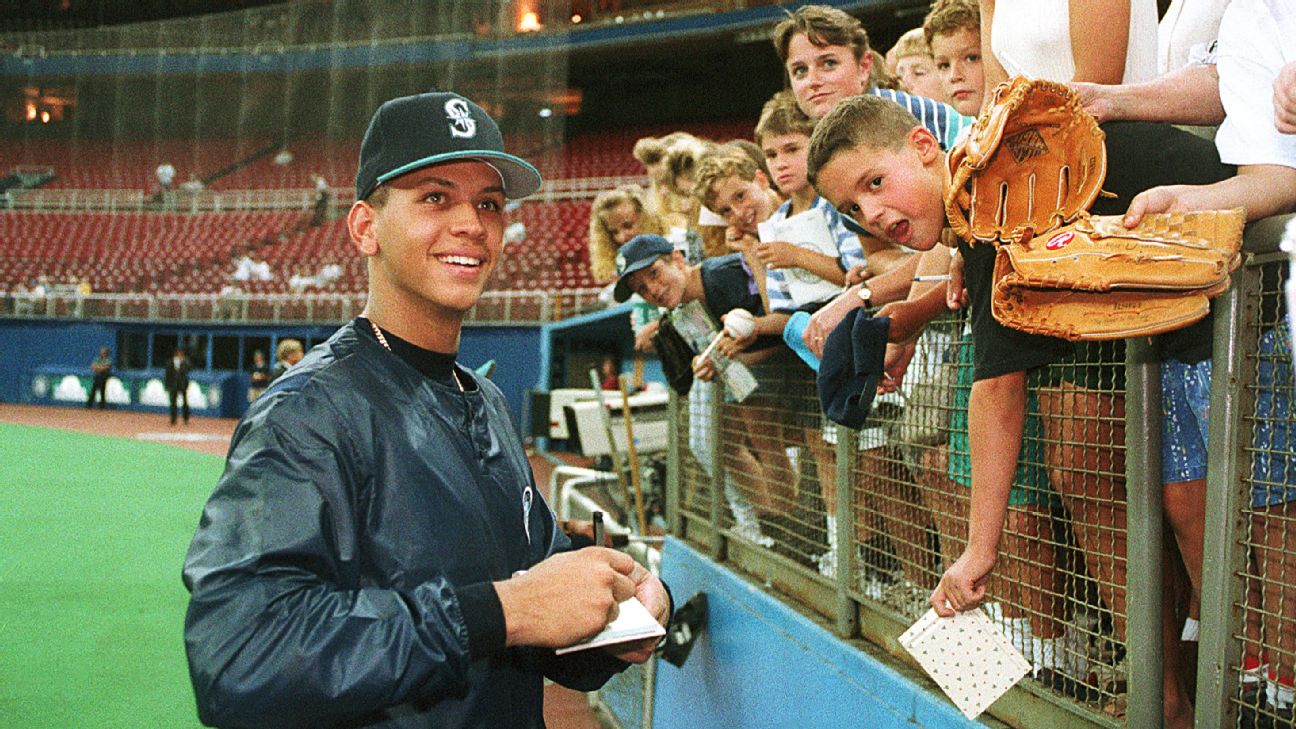 A-Rod’s bat or Griffey’s power? Not the best player, not the best all-around talent, but the one greatest tool all 30 MLB teams have ever drafted.

Rodriguez’s intent was to practice over the weekend, to at least try the timed format, to understand what he is in for. His batting practice pitcher, Franmy Peña, was in Texas over the weekend, with a locker next to Rodriguez’s, as part of their preparation for the Derby.

Peña’s family runs a baseball academy in the Dominican Republic, and Rodriguez said that if not for Franmy and his father, he doesn’t believe he would be in the event. Peña played in the minor leagues with the Rockies and Brewers organizations a decade ago, serving as a catcher for much of that time. Some of the best batting practice pitchers are former catchers because of their short, precise arm action. Peña throws him batting practice a lot, Rodriguez said, and is very consistent.

Of course, throwing batting practice is different when it’s in a ballpark that’ll be packed the way that Dodger Stadium will be Monday, a fact Rodriguez acknowledged. Through the years, nervous and inaccurate pitchers have sometimes sabotaged Derby participants. “But he is ready for it,” Rodriguez said.

The belief among some of the competitors is experience will be crucial to defeat Alonso, and nobody has more Derby experience than Pujols, who is in this event for the fifth time. He will set an age record in the Derby — at 42 years and 183 days old, he is more than 2 years older than Barry Bonds, who was 39 years and 353 days old when he reached the semifinals in 2004.

Pujols is also more than 8 years older than the oldest winner, Dave Parker, who was 34 when he took his swings in 1985 — and, relatedly, Pujols has the most home runs (685) of any competitor at the time.

Pujols asked Kleininger Teran, the Cardinals’ bullpen catcher and a regular batting practice pitcher, to throw for him.

A couple of weeks ago, Schwarber seemed to be leaning against swinging in the Derby. But understanding that the event needs the best power hitters, he changed his mind. Before he made a final call, he reached out to the batting practice pitcher who threw to him in 2018 when he nearly edged Bryce Harper in Washington. Mike Sanicola played at the University of Miami and has thrown to Schwarber in the offseason. Schwarber and others refer to him as Money because his batting practice is so consistent.

“Would you want to do it?” Schwarber asked.

What Schwarber learned about Sanicola in 2018, he said, is that Sanicola “isn’t going to be overtaken by the moment. He’s pretty confident in himself.”

Schwarber said his own takeaway is that he really doesn’t have to try to hit every single pitch. Rather, it’s better to be patient and home in on pitches he can drive. “The constant swinging wasn’t maybe the best strategy,” he said. “But don’t get me wrong, you’re going to be working at a quick pace.”

The left-handed-hitting Schwarber mostly pulled the ball that year, when he came in second behind Harper, but this time around, he figures he’ll try to drive the ball to center or right-center. His sweet spot? “Anywhere in the strike zone,” he said, chuckling. “Aim for the middle, and we’ll go from there.”

Most Derby sluggers will try to aim to one part of the park — like Todd Frazier, who tried to pull all pitches to left field. But when the right-handed-hitting Acuña was in the Derby in 2019, he distinguished himself from other competitors by launching the ball in all directions. “He’s got power to the opposite field, and he can put on a show,” Braves coach Tomas Perez said. 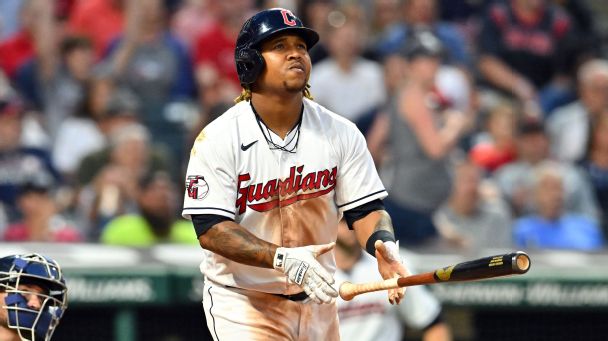 With offensive numbers down this season, let’s look at some examples of how players are performing and compare them to numbers from the past.

It was Perez who pitched to Acuña that year — a Venezuela native pitching to a fellow Venezuelan — and he will again in L.A. He and Acuña had talked for weeks about returning to the event, and about three weeks ago, the Braves outfielder got the invitation officially. “Everybody in my country will be watching,” said Perez, who pitches batting practice to Acuña in the Braves’ daily regimen. “Hopefully, we can do it right, and it’ll be a lot of fun for the fans, for our country.”

Acuña and Perez agreed to practice a little over the weekend in Washington — a timed minute. The sweet spot that Perez says he’ll be aiming for as he works to Acuña: inside just a bit, in the upper part of the strike zone just a bit.

As Ramirez explained through an interpreter, the Derby is something that he’s always wanted to do, partly for those around him, for his mom. “My family was anxious to have me do it,” he said.

And the man throwing to him might as well be family. More than a decade ago, Junior Betances had been hearing often from a friend about his nephew, about what a special baseball talent he was, so Betances found some time to watch the kid. That was the first time he saw Ramirez, then 17 years old.

Then, in his role as a minor league hitting coach, Betances worked with Ramirez, mentoring him in professional baseball. Given all of that shared history, Ramirez reached out last week to Betances, who is now working for the Guardians’ Double-A affiliate, and asked him whether he wanted to throw in the Derby. For Betances, it was an emotional moment.

“It’s unbelievable,” Betances said. “I’m so excited, and I appreciate it so much.” 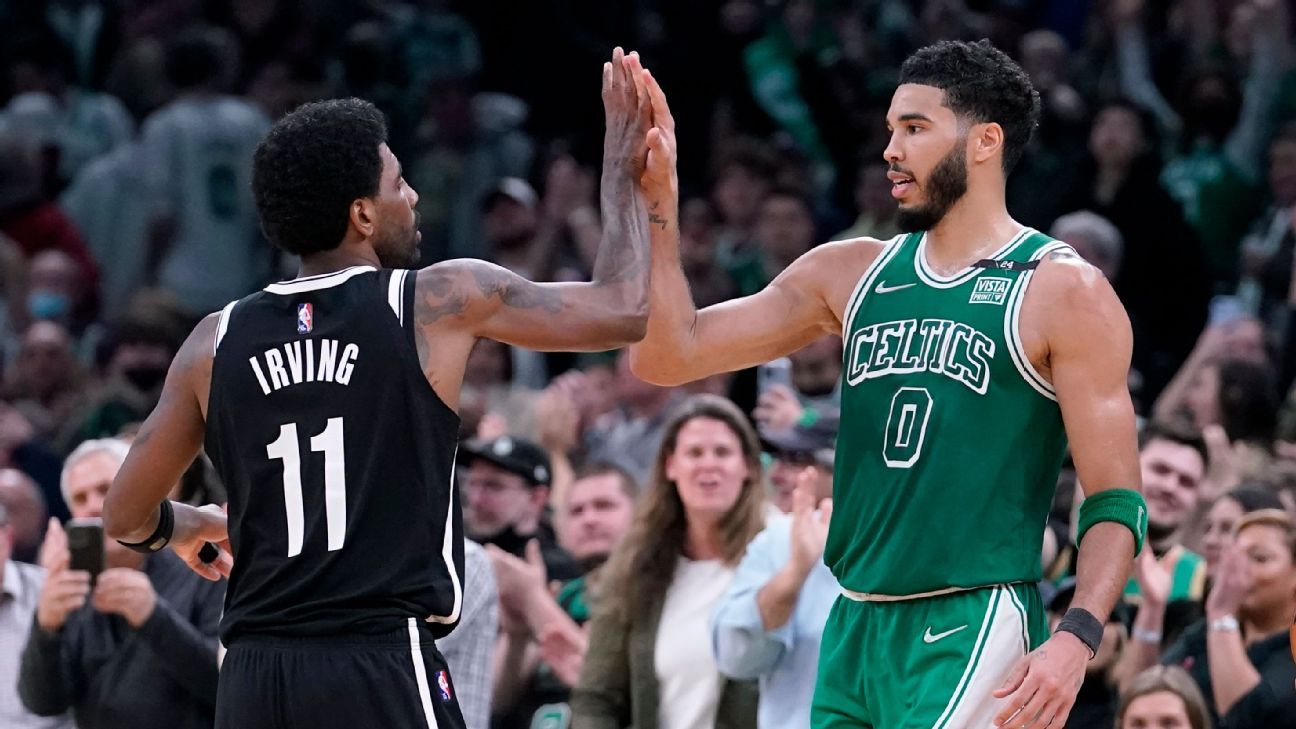 For roughly two hours late Tuesday night at Caesars Sportsbook, the seventh-seeded Brooklyn Nets were favored to defeat the second-seeded Boston Celtics in their first-round playoff series. Caesars installed the 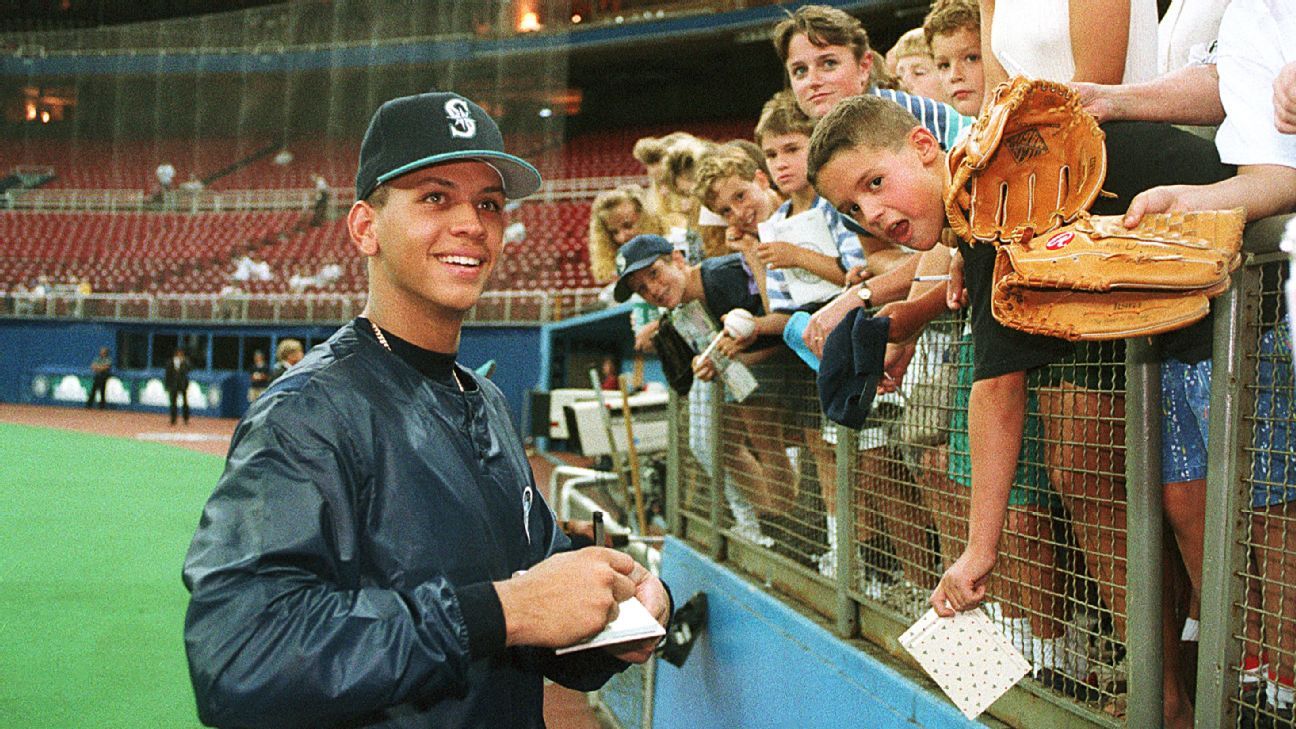 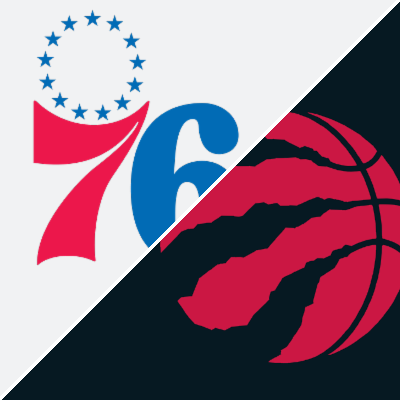