Some of the brightest young stars in baseball are set to take the field at Dodger Stadium in the annual MLB All-Star Futures Game on Saturday afternoon.

On a basic level, I’m excited to see every player in the game because all but one or two of them are in the top 200 prospects in the sport, and about half of them are in the top 100. But, I’ve seen already some of the players in the game as recently as late last season while others are performing really well, but their mechanics, frames and tool grades are just at the high end of the last time I saw them.

This should be a slam dunk for everyone watching the game who isn’t tethered to a certain team. If you find yourself entranced by the unique excellence of Oneil Cruz, then take a look at De La Cruz because they are both similarly tall, thin and with plus to plus-plus tools all over the place — but with the downside of swinging a lot.

The Venezuelan-born Chourio was one of my favorite upside prospects in the 2020-21 international signing class, and he has taken a giant step forward this season. He has center-field tools while posting huge exit velos and in-game power, giving him a shot to be in the top quarter of my offseason top 100 prospects list.

He’s the top prospect in the minor leagues for me right now, even though I’m generally scared of catching prospects at those high spots. To use a technical term about the 20-year-old currently in Triple-A: he has been going bananas at the plate — and doing it for a couple of seasons now.

He started slow, but I noted on June 6th that it was mostly a lack of luck that led to his early struggles. Let’s see what happened since I wrote that:

Yeah, I think it’s safe to say he has turned it around.

I haven’t seen Cartaya in person since just before the Dodgers signed him, when he was just 16 years old. He is now demolishing the league in High-A at age 20 and delivering on preseason expectations he could end this season among the top 10 prospects in all of baseball.

The White Sox love to sign Cuban players in the international market, particularly ones older than the typical 16-year-old prospects, and Colas is the most recent example. He didn’t play in a competitive game for a while, and his body has had a transformation in the interim, so I’m excited to get an updated look at his tool set.

Waldichuk is a funky lefty with above-average stuff that plays up due to deception fueled by the unique way the ball comes out of his hand. This sort of pitcher will always be underrated as a prospect, but he’s knocking on the door of the big leagues and I’d like to get an in-person assessment of how close he is.

Perez might have one of the cleanest résumé of any top pitching prospect in years. He recently turned 19 years old and has pitched the whole year in Triple-A, while other elite pitchers his age have faced only high school competition. The only real drawbacks here are that Perez is really tall (but still repeats his delivery well) and there might not be a 70-grade pitch (but there’s probably three 60s, and some scouts might hang a 70 on his fastball).

I didn’t intentionally pick all three Yankees in this year’s game, I just organically landed on them. Dominguez will always be on this list because of his rare tools, especially for his age, and the huge expectations that have been put on him. 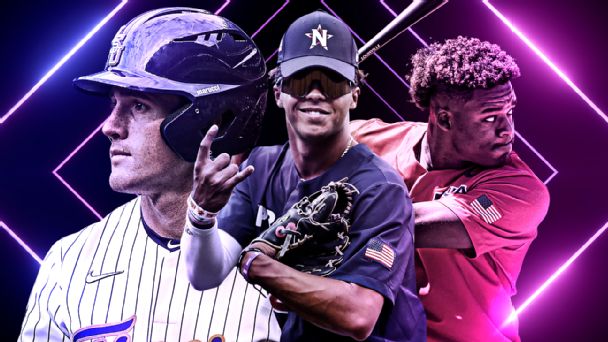 Draft day is almost upon us. Here’s who your team is targeting.

I saw Tiedemann about a month before the draft last spring, so you’d think he wouldn’t make this list, but he has taken such a step forward I’m excited to get another look. He’s a low-slot lefty with a sweepy, plus slider, but now he’s sitting in the mid-90s with added physicality and has gone from a third-round draft pick to a top 100 prospect in a calendar year.