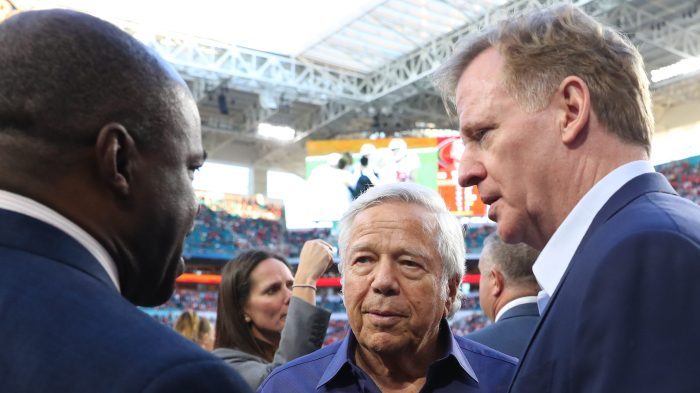 It’s a common refrain among many Black NFL employees who have interviewed for top-tier positions in football operations: They rarely – if ever – interact with decision-makers before the processes begin, whereas team owners often are much more familiar with their white counterparts’ professional and personal backgrounds.

The imbalance, these Black employees believe, is yet another impediment to their upward mobility in a league that continues to struggle in its stated attempt to have a truly inclusive workplace. Well, finally, the NFL acknowledges the problem exists and is taking steps to fix it.

During the league’s annual two-day spring meeting beginning Monday in Atlanta, the NFL will unveil a program intended to accelerate the rise of qualified minority employees in coaching and front-office management. Executives plan to arm the first class of participants with more tools to interview as effectively as possible for the game’s most-coveted positions and, more importantly, put them in the same room – many for the first time – with the powerful people who run professional sports’ most successful league.

Each of the NFL’s 32 clubs chose two participants (one assistant coach and one front-office staff member) for the program. Participants will attend sessions tailored to help them continue to grow in their current jobs, with an eye toward preparing them to be at their strongest when, hopefully, they enter the hiring pipeline in pursuit of positions as head coaches and general managers.

For the participants, however, getting face time with upper-echelon executives and club owners figures to be the most beneficial aspect of the new program. It’s the latest component in the NFL’s unprecedented attempt to address its inclusive hiring problem while also dealing with the lawsuit, which seeks class-action status, filed by former Miami Dolphins head coach Brian Flores, who has alleged the league commits widespread malfeasance in its hiring practices.

Although the NFL has had other programs aimed at increasing minority participation at the highest rungs of football operations, this is the first one designed specifically to provide minority employees with access to team owners. The importance of that cannot be overstated, said Jonathan Beane, NFL senior vice president and chief diversity and inclusion officer.

Invariably, in post-interview discussions with Beane and other league-office officials, minority employees have said that “it shouldn’t be the first time that I’m meeting a decision-maker or a club owner at an interview … when I know, in fact, that they’ve had relationships with other people that they’ve been interviewing with for years,” Beane said on the phone. “[It] just makes the process much more difficult for someone in that position and not equitable. We’re trying to address that.”

NFL club owners don’t have similar backgrounds, or run in the same social circles, as do their employees who are people of color. The NFL has never had a Black team owner. Only two members of minority groups currently have a controlling ownership stake: Shad Khan of the Jacksonville Jaguars and Kim Pegula of the Buffalo Bills. In the subject of sociology, one wouldn’t be breaking new ground to point out that many people tend to be more comfortable around others who share things in common with them – especially race.

“What makes this special, what is gonna create the impact and lasting change, are the relationships that are developed between club owners and the participants.”

Although billionaire team owners aren’t in the same socioeconomic circle as white assistant coaches and front-office staffers either, they identify more closely with them, hiring data strongly suggests, than minority candidates. What’s more, white candidates are more apt to have relationships with high-ranking executives and team owners, or at least be on the radar longer than most minority candidates, because of widespread nepotism throughout the league.

Often, coaches hire the sons of their mentors and the sons of their friends. Bonds between families who have had long-standing ties to the league, strengthened over generations, have provided a leg up in interviews for many candidates. Historically, minority employees in the NFL have not had their hands on the levers of power, so it would stand to reason that their offspring and others close to them haven’t benefited as much from such connections.

That divide must be bridged, Beane believes.

“This whole program is focused on connecting club ownership with some of the best talent on the front-office side and coaching side that we have at the National Football League. That’s what this is about,” Beane said. “What makes this special, what is gonna create the impact and lasting change, are the relationships that are developed between club owners and the participants.”

Beane expressed optimism that, eventually, the program will spur positive change in hiring from the front office to the field – which the NFL acknowledges it needs.

Because as always, the numbers tell the story.

The league has only three Black head coaches: Mike Tomlin of the Pittsburgh Steelers, Lovie Smith of the Houston Texans and Todd Bowles of the Tampa Bay Buccaneers, who was unexpectedly promoted from defensive coordinator recently after former head coach Bruce Arians stepped down and took a front-office role. Mike McDaniel of the Dolphins, who is biracial, joins Ron Rivera of the Washington Commanders and Robert Saleh of the New York Jets as the league’s other minority head coaches.

As for general managers, the league can point to gains made in the front office as an encouraging development.

In 2020, Black or African American players accounted for 57.5% of NFL rosters. It’s a fact: More than half of the NFL’s on-field workforce is Black, but Black executives and coaches are vastly underrepresented in NFL team leadership. 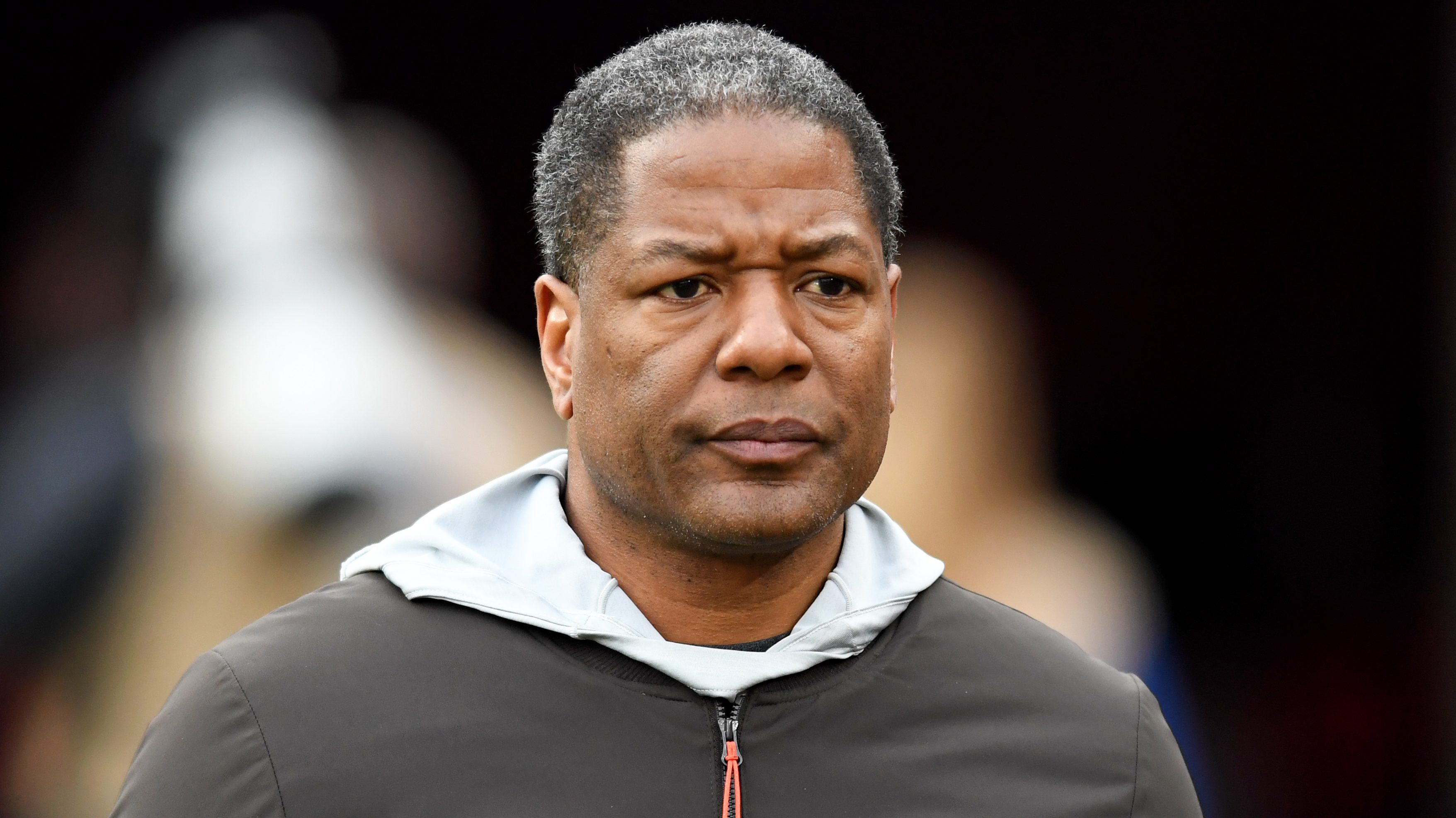 Flores, hired in February as an assistant coach with the Steelers after being fired unexpectedly by the Dolphins in January, has alleged the league discriminates in hiring based on race. Four days after announcing that Flores’ lawsuit, in the league’s opinion, is without merit, commissioner Roger Goodell revealed in a memo sent to owners that the league understands the concerns expressed by Flores and others, and it would initiate a comprehensive review of its entire approach to diversity, equity and inclusion.

During the annual meeting of club owners in West Palm Beach, Florida, in March, the NFL took the stunning step of approving a coaching hiring mandate. Club owners adopted a policy that requires all 32 teams to hire a minority offensive assistant coach for the 2022 season – the first hiring mandate in the league’s history.

Cynics could argue that the league has only ramped up its efforts in diversity, equity and inclusion in the wake of Flores’ lawsuit. In reality, though, Goodell, Troy Vincent, the NFL’s executive vice president of football operations, and others in the commissioner’s office have been banging this drum loudly for years, proponents of inclusive hiring in the league maintain.

And based on his hiring record in the office he controls, Goodell’s bona fides on the matter are without question. The workforce in the league’s New York City headquarters looks like America, and there are Black people under Goodell who hold high-ranking positions.

Leading by example, he hires and empowers qualified people from various racial and ethnic backgrounds and encourages them to increase diversity throughout their departments. The makeup of Goodell’s extended staff proves it. Of the 17 highest-ranking officials in NFL Football Operations, nine are Black. Eight of the nine have vice president-level titles or higher, and the group is led by a Black man: Vincent.

But at the team level, the NFL still has a heavy lift ahead. Following Goodell’s direction, Beane said, the league office plans to keep pushing.

“I have worked with many CEOs, [but] I have not worked with a CEO [who] has the commitment of diversity, equity and inclusion that [Goodell] has,” Beane said. “He is demanding. He wants to ensure that we get this right.” 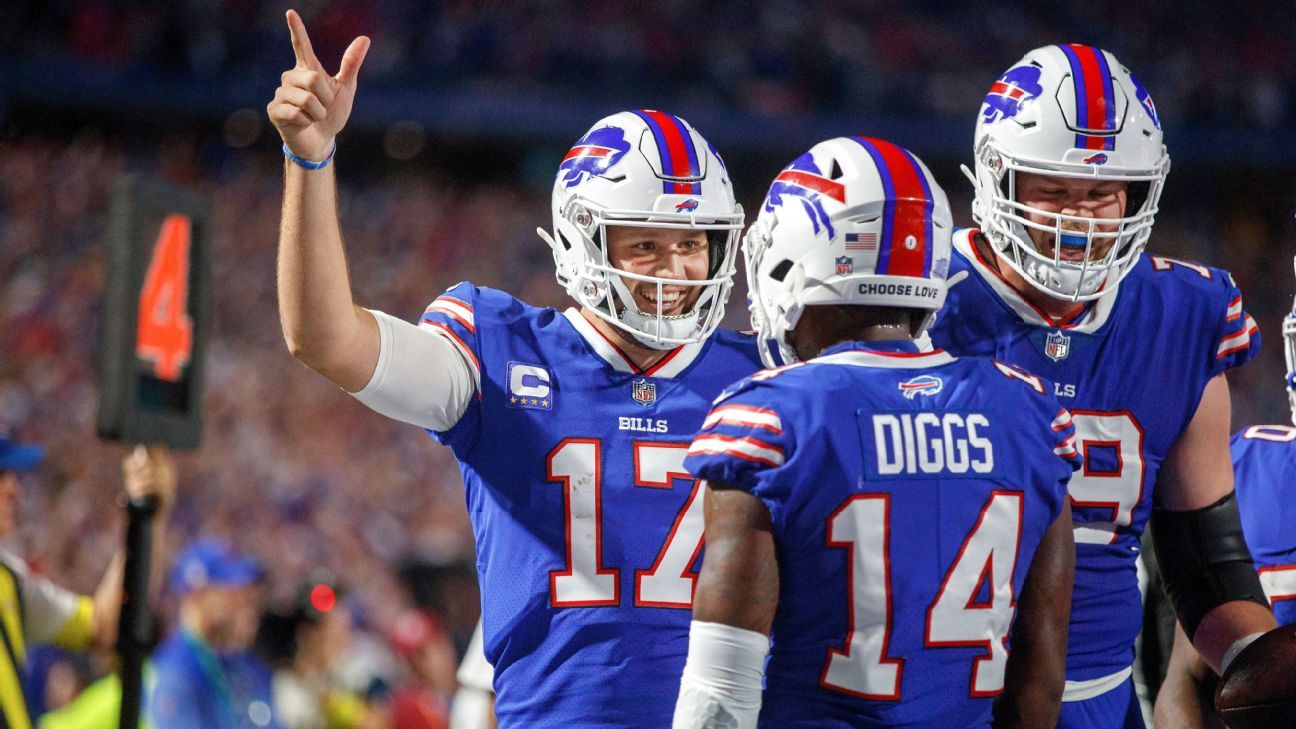 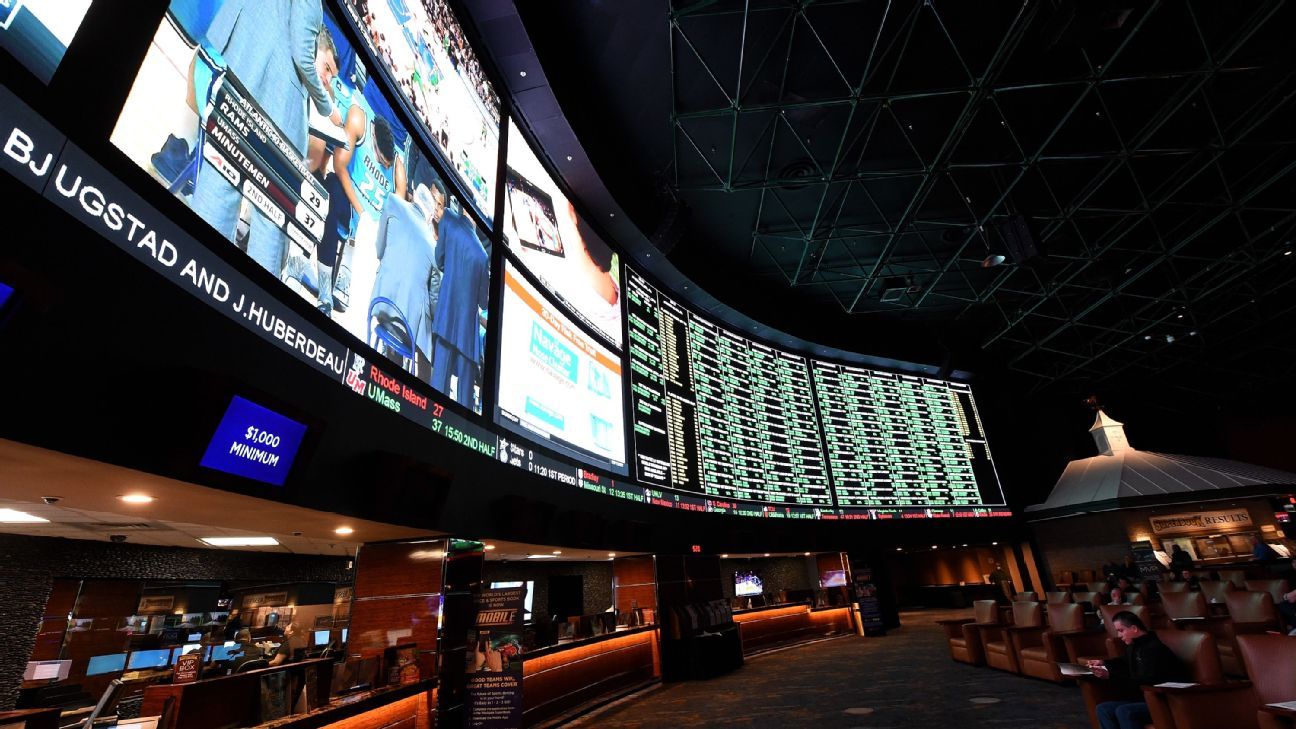 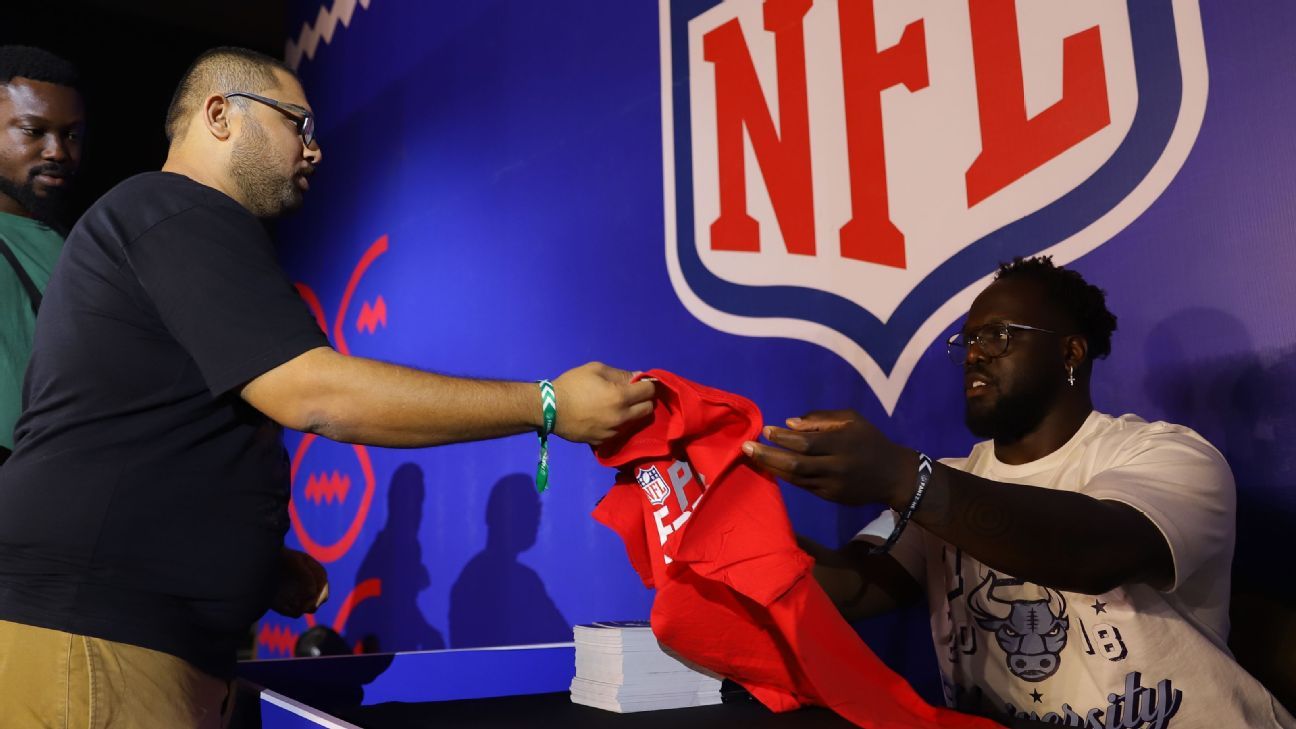 ACCRA, GHANA — Indianapolis Colts defensive end Kwity Paye wants to put American football on the map in Liberia, the soccer-loving nation where his family hails from. Paye was born