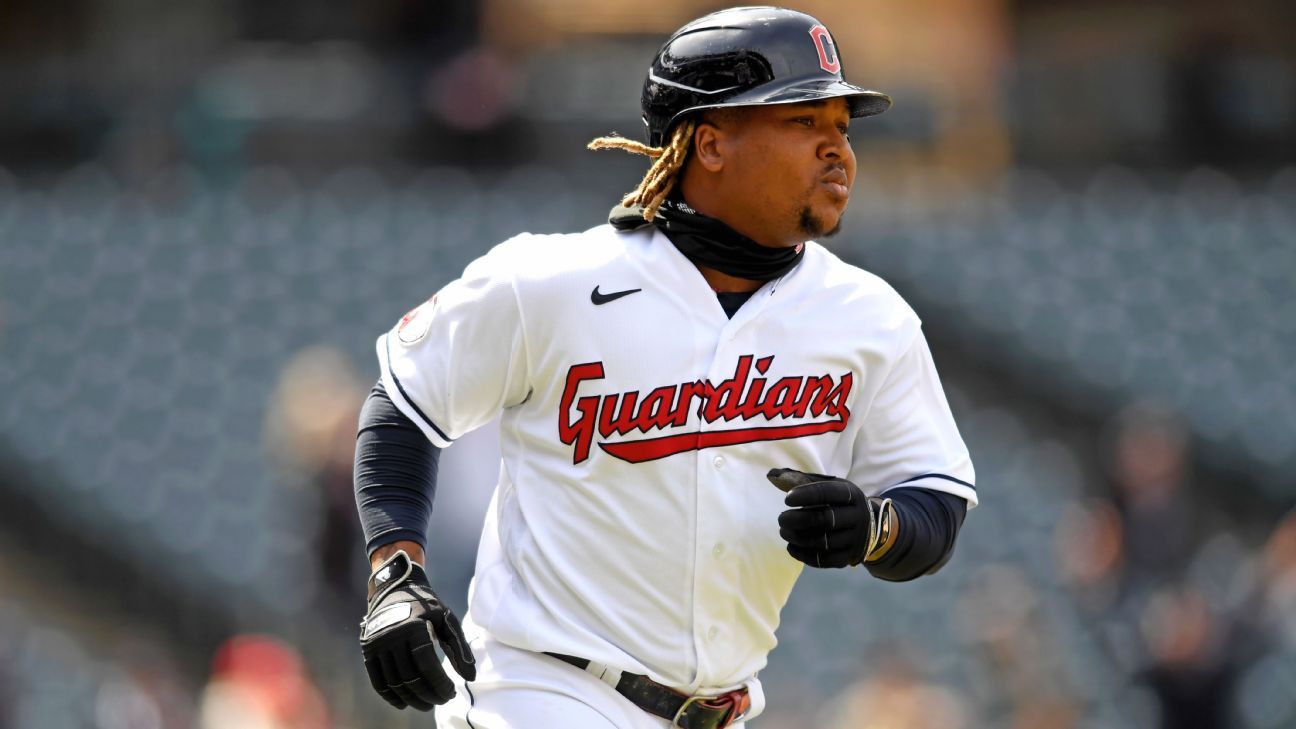 JOSE RAMIREZ WOKE UP the morning of April 5 determined to make something out of nothing.

It was the final day of the Cleveland Guardians’ spring training stint in Arizona, the team’s deadline to agree on an extension with its star third baseman. Progress was stalled, and rival teams had noticed. The possibility of a trade seemed increasingly likely, and Ramirez became alarmed by the thought of it. He reached out to his agent, Rafa Nieves of Republik Sports, a little after 9 a.m. PT and implored him to find common ground with the Guardians’ principal decision-makers. There was work to be done.

“We were on two different planets,” Nieves said.

Nieves began representing Ramirez in 2012, when he was only 19 and widely considered too small to make an imprint on a major league roster. Ramirez stuck with Nieves through three different agencies, the latest one Nieves’ own; Nieves watched Ramirez grow from an unheralded prospect to one of the sport’s best, most well-rounded players. After more than a decade together, they’d become more like family. But Ramirez and Nieves spent most of April’s first week arguing. The Guardians’ offers — one in November, another in March — had come in well below market value, and Ramirez, Nieves said, continually tried to justify them in an effort to stay.

Ramirez, however, longed for stability.

“That was my motivation,” Ramirez said in Spanish, “to stay here.”

Ramirez could have joined a contender, given that the Toronto Blue Jays and the San Diego Padres had ramped up efforts to acquire him over the previous 24 hours. He could have waited until he’d become a free agent after the 2023 season and could sign for significantly more money. But Ramirez, 29, wasn’t interested in any of it. He wanted to stay in Cleveland — remaining in a small market while starring for a franchise at the onset of a rebuild.

By the time the team boarded its flight to Kansas City that afternoon, the two sides had agreed on the framework of a seven-year, $141 million extension, replacing two remaining club options worth a total of $26 million. The deal granted generational wealth, but it didn’t align with Ramirez’s resume. It was a hometown discount, a reality Guardians owner Paul Dolan and president of baseball operations Chris Antonetti had made clear.

“They told him that they can’t afford what he’s worth, and he told them that he didn’t care,” Nieves said. “He wanted to stay there, and they made it work. He knows that he left money on the table, but he says, ‘$150 million or $200 million, my life is gonna be the same. I’m happier with $150 million in Cleveland than $200 million somewhere else.'”

FROM 2016 TO 2021, only Mike Trout and Mookie Betts accumulated more FanGraphs wins above replacement than Ramirez. Ramirez batted .286/.364/.531 during that six-year stretch and joined Betts and Trea Turner as the only men who surpassed both 100 home runs and 100 stolen bases, while also racking up 30 outs above average on defense.

His new contract is more than double Cleveland’s previous record for total value, but it might still be an underpay. It’s only the fourth-largest deal among current third basemen and falls significantly short of prior agreements signed by Anthony Rendon, Nolan Arenado and Manny Machado, three men with slightly inferior resumes. Had he waited two more years to hit the open market, Ramirez, whose leverage was limited by the club options that remained from his prior extension, likely would’ve attained Rendon’s $35 million average annual value. Had he been traded, people in the industry believe his new team would have immediately offered an extension that neared $200 million.

Instead, Ramirez is headlining what otherwise projects to be one of the worst offenses in the sport, and he is seemingly reaching new heights while doing so. Ramirez won American League Player of the Month honors for April, leads the majors in RBIs and is batting .318/.419/.659 with 50% more walks than strikeouts through the first four weeks. It’s early, but Ramirez is on pace to potentially finish in the top three in MVP voting for the fourth time in six years, a distinction achieved by only 11 players, according to research by the Elias Sports Bureau: Hank Aaron, Yogi Berra, Barry Bonds, Joe DiMaggio, Hank Greenberg, Mickey Mantle, Stan Musial, Albert Pujols, Alex Rodriguez, Ted Williams and Trout.

Ramirez is that good. 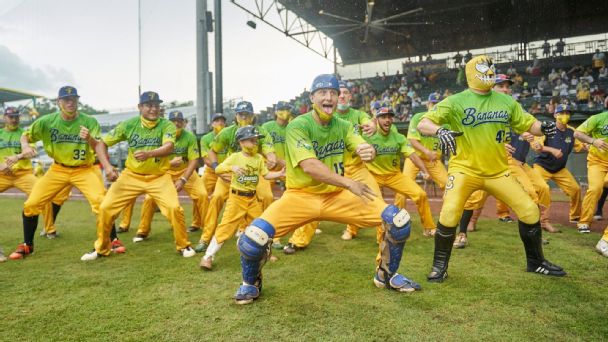 How the Savannah Bananas are changing the rules of baseball.

“You have to see him every day to appreciate who he is,” Guardians assistant hitting coach Victor Rodriguez said in Spanish. “There are a lot of people who don’t realize how good he is, and that’s sad.”

Ramirez, listed at 5-foot-9 and 190 pounds, can’t run like Betts but he is one of the most dynamic baserunners in the sport. He can’t throw like Machado but few are better defensively. He can’t drive the ball like Trout but his combination of bat-to-ball skills and power — as a switch-hitter, no less — has few rivals. The separator, many say, is his instincts, which Ramirez sharpened as a boy playing among men back home in the Dominican Republic. He always seems to be positioned perfectly on defense, rarely makes a bad decision on the bases and usually only ventures outside the strike zone intentionally, while trying to force action when pitchers don’t throw enough strikes.

Those who play in Cleveland usually come to learn Ramirez might be a savant.

“The more and more I hang out with him off the field and talk to him, the more I realize how much he recognizes throughout the game,” Guardians center fielder Myles Straw said. “It’ll look like he’s just sitting at the end of the dugout, and then you ask him about an at-bat that you didn’t think he was watching and he’ll know every single pitch.”

Ramirez’s offseasons usually begin with a one-week “vacation” that is instead spent in workouts, then spill into three to four months of rigorous gym sessions and full-on baseball activities until spring training begins in the middle of February. By November, Rodriguez’s phone will already be populated with videos of Ramirez gathering with friends to take batting practice on a vacant field in his hometown of Bani, the same Dominican city that produced Miguel Tejada and Wander Franco. Rodriguez used to tell him to take it easy until he realized baseball is the only thing Ramirez likes. He is a man with no hobbies.

MOMENTS AFTER SPENDING half an hour waxing poetic about Ramirez in Anaheim, California, last week, Rodriguez came back into the visiting dugout to share one more anecdote he deemed crucial: that Francisco Lindor once said if he owned a team and could sign any player throughout the sport, it’d be Ramirez.

Cleveland possessed arguably the best left side of the infield in the majors until 2021, when Lindor, a four-time All-Star shortstop, was dealt to the New York Mets because Cleveland couldn’t afford to keep him. The divergent paths of Lindor and Ramirez are also a great example of their divergent personalities.

Lindor is effervescent and gregarious, with an interest in marketing himself and a desire to maximize his value, a sensibility that landed him on the players union’s executive subcommittee. When he realized Cleveland wouldn’t give him a market-leading deal, he became open to a trade — and a move to the Big Apple, where he’d reside on the biggest stage, was a selling point. Ramirez is quiet and understated, with a desire to play baseball and to be left alone.

His expressed desires were simple.

The Guardians’ final offer wasn’t much better than their prior one, Nieves said. But Ramirez was determined to make it work. Once the Guardians agreed to include a full no-trade clause and landed on a framework without deferrals, a deal was agreed upon.

Nine days later, after it was officially announced, Ramirez expressed his sentiments with a heartfelt Instagram post thanking the organization for helping “​​fulfill [his] desire of never wearing another uniform.”

“I recognize that when I was a kid looking for an opportunity, this is the organization that gave it to me,” Ramirez said in an interview with ESPN. “It was also the team I reached the big leagues with, that gave me my first contract. My dream was to stay here, in this organization. And also my daughter was born in Cleveland, too. I feel a part of that community.”

Ramirez emerged on the 2016 Cleveland team that reached the World Series and fell a run short of its first championship in more than half a century. He is one of only two players remaining from that group, along with middle reliever Bryan Shaw. Three consecutive 90-plus-win seasons followed, but the window closed shortly thereafter, and now a new contender is waiting to emerge in Cleveland.

Baseball Prospectus’ projection tool, PECOTA, forecasts 76 wins for the 2022 Guardians. But they possess the ninth-best farm system in the industry, according to ESPN’s Kiley McDaniel, with four players among the 100 highest-rated prospects. Their major league rotation — Shane Bieber, Triston McKenzie, Zach Plesac, Cal Quantrill and Aaron Civale — looks solid. Their young closer, Emmanuel Clase, possesses a bright future. Soon, one would think, the Guardians will be good again. And the front-loaded nature of Ramirez’s team-friendly contract should allow them to supplement the roster around him.

Wherever this next rebuild leads, Ramirez will be there to guide them through it.

“MVP, that’s nothing,” Ramirez said when asked about his personal goals. “What I want to do is win the World Series. And I want to do it here.” 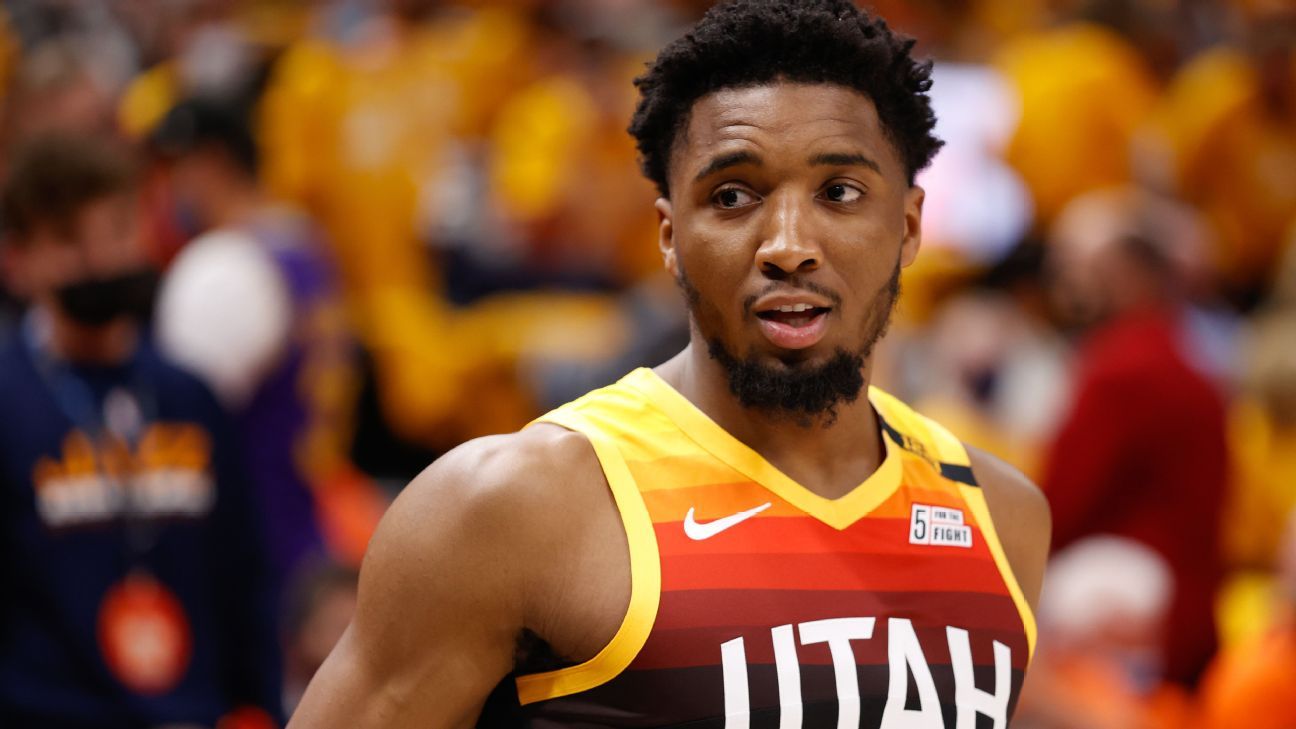 What does Donovan Mitchell‘s trade to the Cleveland Cavaliers mean for the Cavaliers’ chances of contending in the Eastern Conference? In a surprising outcome to the summer-long question of whether 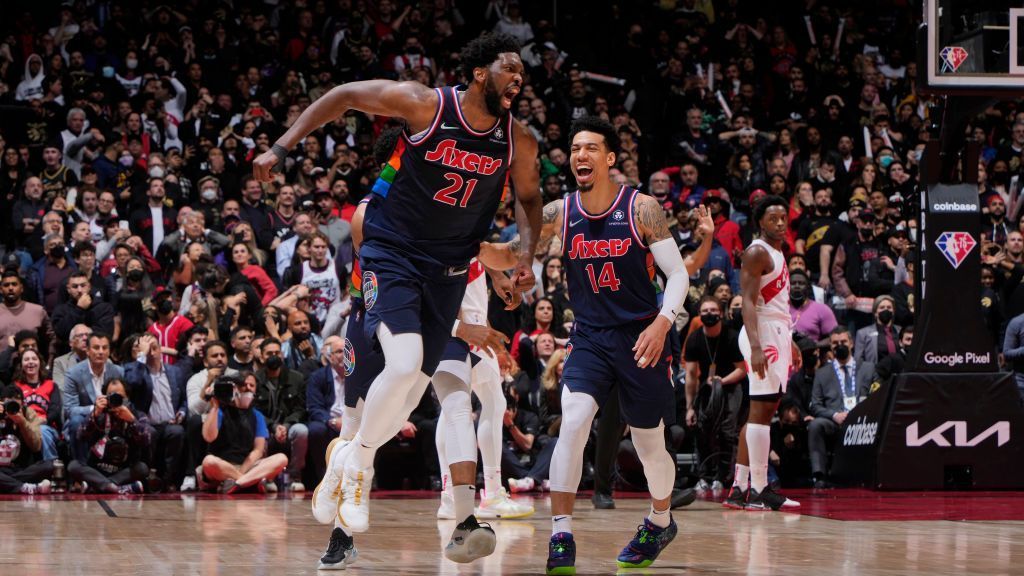 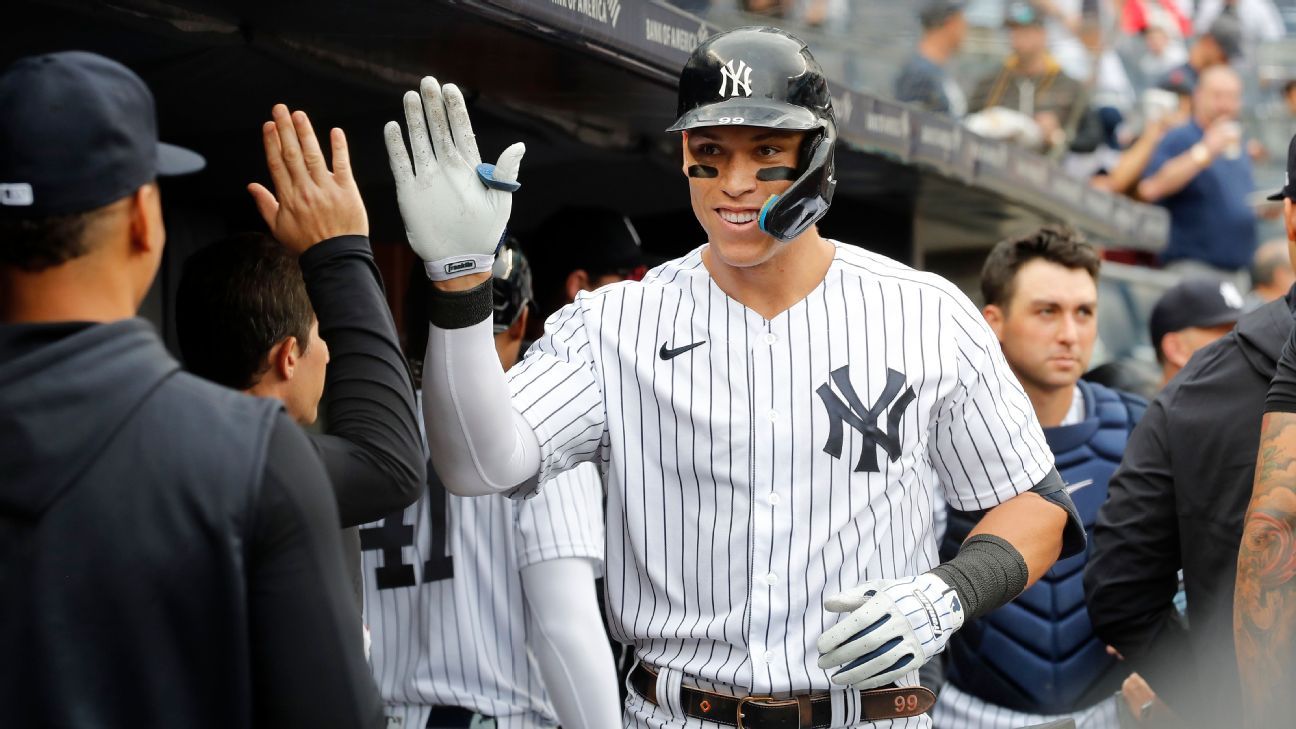 Right when you think Aaron Judge might slow down, he goes on another blistering home run barrage. In mid-August, he went a season-high nine games in a row without a